Won’t You Be My Neighbor? 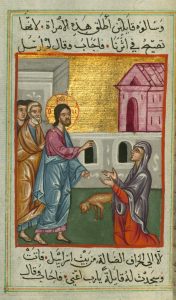 According to Jesus, the most important thing we can do is to love God with all that we are, and our neighbor as ourselves.  But who is our neighbor?  Which neighbors was he talking about? Our next-door neighbors? People within a one-block radius? Folks who feel like neighbors, because we have a lot in common with them? Who are we supposed to love as well as we love ourselves?

Jesus treats almost everyone he meets as his neighbor.  Strangers from far-away towns are his neighbor. Folks who are sick are his neighbor. He is neighborly to the poor, and to tax collectors, and to prostitutes. That’s why it comes as such a surprise, the story we hear today, when Jesus meets the Syrophoenician woman.

Jesus is tired that day. He’s been teaching and healing to great crowds, and he’s hoping to escape notice when he enters the house in Tyre.  No such luck. A gentile woman, a Syrophonecian woman – a foreigner – finds him. She begs Jesus to cast a demon out of her daughter. And Jesus replies, “Let the children be fed first, for it is not fair to take the children’s food and throw it to the dogs.” In other words: you are not my neighbor. You have no claim on me. You and your child are no better than dogs.

These words are heart-rending to read.  Amazingly, the woman is not daunted. With the desperation of a parent with a sick child to care for, she replies: “Sir, even the dogs under the table eat the children’s crumbs.”  Degrade me, she says, but even dogs deserve compassion. Call me anything you want, but help my daughter.

Jesus seems to realize he’s made a mistake.  Immediately, he changes his mind, and cures the woman’s daughter. Apparently, they are neighbors after all.

This summer a documentary came out about another man who turned strangers and enemies into neighbors and friends. I bet many of you saw it. Do you know what I’m talking about? I’m talking about Mr. Rogers. If you haven’t seen the documentary about his show, I highly recommend it. Bring lots of tissues.

Clergy are fond of informing people that Mr. Rogers was one of us: a Presbyterian pastor. He said, “Love is at the root of everything: love or the lack of it.” He was called to the work of offering love and unconditional acceptance to hundreds of thousands of people, most of whom he would never meet: children on the other side of a television screen.

It’s good to remember, as this documentary reminds us, that Mr. Rogers wasn’t simply sweet, and he definitely wasn’t naive. He tackled difficult topics, racism and assassination and disability and war and death.  He allowed his characters to express difficult emotions, to face conflict, and to struggle with their identity and abilities. Like any good pastor, Fred Rogers addressed what was really going on for his congregation, and he brought an honest, compassionate, and hopeful message in the midst of those realities.  Still, now, whenever something horrible happens in the world, I hear people quoting him, reminding us to “look for the helpers.”  Mr. Rogers points us towards whoever is doing works of love and courage amidst tragedy or hate.

I was a member of Mr. Rogers’ congregation as a child in the 80s. Maybe some of you also joined in the congregation as children or parents or grandparents.  Mr. Rogers wanted to help us deal with our feelings, encouraging us to notice them, value them, find words and ways to express them.  He also wanted us to recognize ourselves as beloved children of God, telling us: “I see you, I like you just as you are, and there’s nobody else exactly like you.”  Put that one on your bathroom mirror, for everyday encouragement.

Mr. Rogers gave us the gift of slowness, and the gift of silence. While television programs were speeding up, adding special affects and violence, on Mr. Rogers’ neighborhood you could watch a tortoise take a slow walk across the floor, or see him patiently feeding his fish, and watching them swim.  When Mr. Rogers interviewed famous people, he would ask a simple question and then wait… and keep waiting, until the person had offered not one, but several interesting thoughts. Try it the next time to really want to hear from someone.

In reaching out to the world with radical kindness, Fred Rogers was not so different from Jesus. He invited us to be his neighbors, teaching us that we were loved, and capable of loving others.  Fred Rogers learned a lot from Jesus and, from what I can tell, he lived closer to Jesus than many of us do. But he wasn’t perfect. He doubted himself: whether he was worthy, whether he was loveable, whether he was good at what he did, and whether what he did was making a difference. He also made mistakes.  When he found out one of his cast members had been spending time at a gay bar, he told him: You can’t go back there.  It’s not clear if it was homosexuality that was the problem, or whether he wasn’t willing to risk his corporate sponsorships. It wasn’t until years later that Mr. Rogers was able to accept this cast member fully, to love him just the way he was, and to tell him that clearly – just as he had told so many of us that we are special just the way we are.

As we gather here this fall, together again in greater numbers, it’s good to remember why we’re here. This local church is a place that we can come to remember that the most important thing we can do is to love God, and our neighbors as ourselves.  This church is also a place where we can practice being good neighbors, and form a neighborhood with folks we might otherwise never get to know.

It can be easy to get discouraged while we’re making a neighborhood together.  There are disagreements here among us.  We make mistakes, get hurt, and hurt one another in turn.  It may be possible to love God, but can we really love each other, or ourselves?

We’ll continue to talk about the art of being a neighbor as the month goes on.  But for today, let’s receive the gift both Jesus and Fred Rogers offer us in the example of a beautiful, holy life lived imperfectly.  It’s not possible for anyone, it seems, to get neighbor-love right every time. Still, if we keep showing up, and trying, and listening, and learning: we’ll have an awful lot more love in our lives than if we gave up on neighbors and neighborhoods altogether.

I’m so grateful to be in a neighborhood with all of you beautiful people of West Concord Union Church.  I love the imperfect and precious love we are working on together.  I wonder if we can share in that song that Fred Rogers sang at the beginning of each episode: as he came into his TV home, traded his coat for a sweater, traded his dress shoes for sneakers, and prepared for a good visit with us.

Take a look at the piece of paper; Listen to Mr. Rogers, and sing along to your neighbors in the room, if you like.

Let’s pray:  Holy God, help us learn that we are your beloved children, just the way we are. Help us learn how to be good neighbors, so that we might all share in love together. Amen.