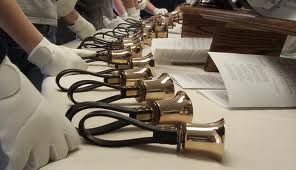 “I’ve always wanted to play handbells!” These immortal words were uttered a week ago by the newest member of the Handbell Choir, Amy G.. She jumped into the fray at the first rehearsal of the season on September 3rd. Now, with two rehearsals under her belt, she’s realizing her dream!

The Handbell Choir has been blessed in 2014 with the addition of three ringers to its ranks: Janet, Amy , and Tom . They join our veteran ringers to make eleven ringers in the choir — a record for WCUC! While having eleven ringers is awesome, we have, as a result, outgrown our small two octave (25 bells) set of handbells. (Typically, eight ringers are needed for a two octave set.) Eleven ringers is the ideal number for an expanded three octave (37 bells) set of bells. While researching the cost of expanding from two to three octaves– three tables, three pads, the third octave of handbells and cases to store them– we are currently borrowing what we need on a weekly basis from Holy Family Parish. (Many thanks to HFP!) So, don’t be surprised when you see oodles of tables and bells on the chancel some upcoming Sunday. And, of course, watch for our eleven amazing ringers!