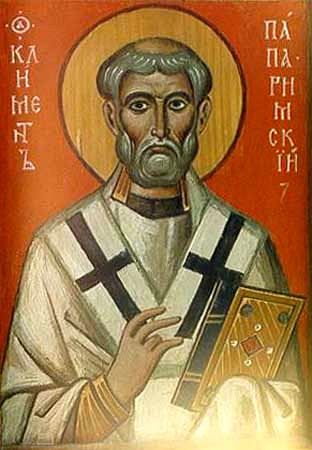 During our service, we read a portion of the Epistle of Clement to the Corinthians.  This text is not part of our bible, but was read regularly at early church gatherings.

For the past two weeks we have been focusing on some of the earliest saints of the early church: Phoebe, and Junia, and Lydia. This week we move into a slightly later part of the Christian story, to the end of the first century, to a man called Clement of Rome, one of the first leaders of the Roman Christian community.

Not much is known about Clement, although plenty of traditions have grown up around his name. One story claims that Clement was banished from Rome during the persecutions under Emperor Trajan, and set to work in a stone quarry. Finding his fellow-prisoners suffering from thirst, he began to pray. Looking up, he saw a lamb on a hill, and when he came to that place and struck the ground with his pick axe, a gushing stream of water emerged for all to drink. As punishment for performing this miracle, Clement was tied to an anchor and thrown into the Black Sea. A monastery marks the supposed place of Clement’s burial in Crimea.

Even more spectacularly, Clement is the hero of an early Christian novel. In this account, Clement hears an apostle preaching in Judea, defends him against an angry mob, and follows him to Palestine. There he meets Peter, and becomes his student, recording his teachings and sending them throughout the ancient world. Clement is baptized, and eventually shares his life story with Peter. Clement’s life story, it turns out, sounds a little like a Lifetime Movie. Soon after his birth, Clement says, his mother had a vision that unless she left Rome with her two elder sons, the three of them would die. The three of them went to Athens, but later disappeared. When Clement was 12, his father left to look for them; nothing more was heard of him. This sad story has a happy ending, though; in their travels, Peter himself discovers a miserable beggar woman who turns out to be Clement’s mother; and two members of the Christian movement declare themselves to be his brothers after hearing the story. No sooner has this happened, but an old man disputing Peter is revealed to be Clement’s father. The whole family lives happily ever after.
But all this thrilling drama obscures Clement’s main claim to fame: as one of the earliest leaders of the Roman church, he is considered one of the first popes, though he never claimed that title for himself. And as part of the first or second generation of leaders after the apostles, Clement played a key role in helping the church discern how it would be governed. The letter that we heard this morning was written to the church in Corinth after a major leadership shake-up. It was read frequently in the years afterwards to help establish the rules by which leadership would be carried out.

Clement’s letter explains that God sent Jesus; and Jesus sent the apostles. The apostles went out and chose individuals from among their early converts to be bishops and deacons of the local churches they planted. When these leaders die, Clement explained, they should be succeeded by other approved men. And no one who is chosen for leadership, who serves faithfully, should be dismissed from ministry. Roles of leadership should not lead to jealousy, but all should work together for the common good of the community, and for the common cause of the good news of Jesus Christ.

On one hand, this seems to be faithful and common-sense advice. And yet, I admit that when I read it, it makes me a bit nervous. I notice that while in earlier decades women seem to be on an equal footing with men, just a few decades later Clement assumes that all leaders will be male. I also find his instructions short on detail – how, exactly, should the next generation of leadership be chosen? Who should decide if someone is carrying out ministry faithfully? But most of all, what effects my reading of this text is the knowledge of what came next: an increasingly rigid system of male hierarchy in which the bishop of Rome claimed political and theological control over an increasingly vast and diverse church. A priesthood which has had all too many failures, despite the good work of so many. And, in all the subdivisions of the church, we have had our own problems following this precedent, too.

It is so tempting to want to go back – to the days before Clement, or even to his days, still quite close to the memory of Jesus, before the church was so profoundly influenced by the Roman empire. We can dream that this earliest church was more pure, protected from many of the sins we see in the modern church.

But people are people everywhere. Jealousy and competition arose in Corinth, just as they arise today. Culture and politics come into play. And so every church on earth, and the church as a whole, past and present, falls very painfully short of its goal to be the body of Christ on earth.

So I wonder: what letter would you have written to the Corinthians, to guide them in their time of conflict? How would you have led the church in Rome in the last years of the first century? And how do you imagine we can now best organize ourselves into a church, all of us followers of Jesus, in this post-Christendom world?

God, we give you thanks for Clement, and for all who did their best to lead the church in wisdom and humility. May we forgive their flaws, as we would ourselves be forgiven. May we listen closely to your guidance as we take up our own place in the story of your people. Amen.