This summer at West Concord Union Church we have been exploring dreams and visions in the bible. We started with the book of Genesis 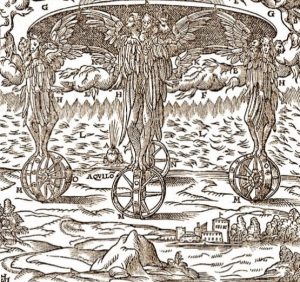 The Prophet Ezekiel was one of those Israelites who was forced into exile, when King Nebuchadnezzar and a Babylonian army besieged Jerusalem, about 600 years before the birth of Jesus. Being in exile was difficult for everyone, but perhaps even more difficult for Ezekiel than most, because he was from a priestly family. Away from Jerusalem, Ezekiel is deprived not only of his home, but also of his vocation: to serve God in God’s holy temple.

Ezekiel could have lived and died in obscurity, separated from all that he cared for. But as the scripture we hear today describes, something amazing happens instead. It is Ezekiel’s thirtieth year – the year when he would have become a priest, if he was living in Jerusalem. He is sitting by the river Chebar, by his refugee camp. Then, suddenly, the heavens open, the hand of the Lord comes upon him, and he sees an amazing vision.

There are four creatures of human form, each with four wings and four faces. There is a wheel by each of them, and a wheel within each wheel. Above the creatures and the wheels is a throne. On the throne is something almost indescribable: bright, loud, with splendor all around. It is the likeness of the glory of God.

The imagery in Ezekiel’s vision may seem strange to us. It was at least somewhat less strange to his contemporary listeners. The winged beings he describes are a little bit like the cherubim that flanked the doorways in the holy temple in Jerusalem. The flame and cloud he describes are similar to how God showed up on Mt. Sinai, and over the Arc of the Covenant. Still, Ezekiel’s vision is extravagant and overwhelming. There are burning coals, flashes of lightening, gleaming gemstones, moving spirits, and the sound of mighty waters. Even more amazing, this vision does not appear in the temple in Jerusalem, or on Mt. Sinai, or over the Arc of the Covenant. It does not appear in any great or holy place. The likeness of the glory of God arrives on the banks of a river, by a refugee camp, in Babylon.

When I consider Ezekiel’s vision, I will admit to feeling just a little bit jealous. The vision sounds terrifying, it’s true – and Ezekiel’s call was terrifying, too.  But how amazing to have God show up, right before you, with the kind of astonishing spectacle we usually associate with rock concerts, or blockbuster movies.

The God Ezekiel encounters isn’t a still, small voice; or a quiet leading of the heart. This God isn’t like the domesticated images of Jesus that are so popular, either: mild-mannered, pale skinned, holding a sheep. This God burns and flashes and gleams with startling splendor. This God inspires awe and humility.

Folks in the bible, and in Christian tradition, and we ourselves, encounter God in many ways, most of them much more subtle than this. But how amazing to be utterly stunned and carried away by God’s wildness, by God’s otherness, by God’s fierce beauty, by God’s incredible power.

Perhaps just as amazing as the way God shows up to Ezekiel, though, is where God shows up. Ezekiel is stunned to realize that God has come to Babylon.  The Israelites know that God led them up out of Egypt. They know that their ancestors made a glorious home for God in Jerusalem.  But it seems that God does not limit Godself to that one holy, majestic location, even though it still exists. No, She goes into exile with her people, meeting the faithful where they are; even in a refugee camp.

God is where the people are. God is everywhere. This message that Ezekiel receives is repeated towards the end of the book. Ezekiel sees in another vision that an even more glorious temple will be built one day, and that God’s glory will go there. But not only there. In this new temple, water flows out from the sanctuary to form a mighty river. The river flows east, spreading fresh water in the desert. Wherever this river goes, living creatures swarm with life. Wherever this river goes, trees grow along the banks, bearing fruit to eat, and leaves for healing.  Earth and its plants and its creatures are remade, refreshed, and sustained by the nurture of the river of God, reaching out from the temple into the world.

Please pray with me. Holy unimaginable one, help us to open our minds and hearts to the gleaming of your faithfulness, the burning of your mercy, the flashes and thunder of your justice; Your mighty, marvelous love. Help us not to fear your glory, but to seek it, and to celebrate it, with praise, with awe, and with the dedication of our lives. For your love was not meant to stay only in one place, or even with one people: it reaches and roars like a mighty river. Help us to put our trust in your promise that Your glory will shine forth again, even in people like us. even in a time like this. Thanks be to God. Amen.