The Rise & Fall of Kingdoms 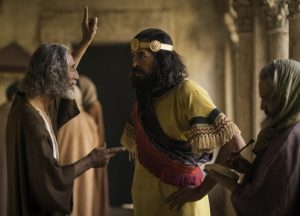 This summer we’ve been exploring dreams and visions of the bible. We started with texts from Genesis and Acts. Last week I spoke about the visions of Ezekiel. Today we hear from the book of Daniel, which, like Ezekiel, is set in the time when King Nebuchadnezzar of Babylon had besieged Jerusalem and sent many of its leaders into exile. Ezekiel, who came from a priestly family, saw visions of God from his vantage point in a refugee camp. Daniel, who comes from the line of David, ends up in the courts of Babylon and Persia, mixed up in royal intrigues. Both books imagine a future beyond the Babylonian captivity, and beyond all time as we know it.

Many folks who grew up in a church have heard of Daniel. We’ve heard the story where he is thrown into a pit of lions because of the suspicion that he worships Yahweh rather than the king. There’s another really popular Sunday School story in this book, about Daniel’s friends, who have acquired the Babylonian names Shadrach, Meshach, and Abednego — they’re the ones who were thrown into a fiery furnace. Given Daniel’s popularity, it pains me to tell you that modern scholars agree that Daniel did not exist. Not only that, but the book of Daniel is a bit of a mess, written at two different times in two different languages, and with three stories that are either included or excluded, depending on which version of the bible you use.

However, none of this precludes our learning something about God from the stories in Daniel. After all, our ancestors in faith though that this text was important enough to record in their holy book. I also could not possibly leave Daniel out of this sermon series, because this book is chock full of dreams and visions.

It all starts with the story we heard David read. King Nebuchadnezzar is losing sleep because of his strange dreams. So, he summons Babylonian wise people, enchanters, magicians, diviners, who he asks not only to interpret his dreams, but also to know what the dreams are, without being told. As it turns out, no one can do this, even under threat of death: no one expect our hero, the Israelite Daniel, with the help of his God.

Nebuchadnezzar has dreamt of a great statue, with a head of gold, a torso of silver, thighs of bronze, legs of iron, and feet of iron and clay. These all, Daniel explains, represent kingdoms that will rise to rule the earth. However, in the end, God will set up a new kingdom that will crush all of these kingdoms. This new kingdom of God will stand forever, like a great mountain, covering the earth.

Daniel takes a big risk in coming forward and offering this interpretation to the King. However, his risk pays off.  The King is impressed by Daniel, worshipping and promoting him, and praising Daniel’s God.

Unfortunately, the King’s awe of Daniel’s God does not entirely protect him. In subsequent chapters, both Daniel and his three friends are threatened because of their loyalty to this same God. However, these four Israelites hold fast again and again to their faith, and are rewarded for it, both by God, and, oddly enough, by King Nebuchadnezzar.

As the book goes on, we hear more dreams and visions from both Nebuchadnezzar and Daniel. All of these dreams and visions point to the same meanings as the first. There will be many violent human empires to rule the world, with rulers who fail to humble themselves before God. However, in the end, God’s kingdom of justice and peace will overcome them all. The only question that remains is: when? When will God’s kingdom, God’s reign, God’s way, finally come to pass on the earth?

How long, O Lord? This question was important to the Israelites under Babylonian rule. It was important to their descendants, still facing foreign powers, who included the stories of Daniel in the bible. Even today, we wonder how long it will be before God’s kingdom, God’s reign, God’s way will come, when peace and justice will fill the earth.

Unfortunately, the book of Daniel can’t tell us how long we have to wait. Neither  can anyone else. And there’s another puzzle to trying to apply this story to our modern day life. It’s often hard to write off human kingdoms as solely good or evil, the way they are in this book of the bible.

For example: in the past week or so debate flared again around our immigration policies. The current administration is making a change, so that it explicitly measures the wealth of immigrants when determining who may enter the country.  Those who are not rich enough do not merit entry. In response, many quoted the lines inscribed by our Statue of liberty: “Give me your tired, your poor, your huddled masses yearning to breathe free, the wretched refuse of your teeming shore. Send these, the homeless, tempest-tost to me; I lift my lamp beside the golden door!”  We are defined as a nation, these folks said, by the way we offer welcome and freedom to all.  The new immigration policy is a betrayal of our most basic values.

Is this really true?  History tells us that the American ideal of welcome and freedom has always co-existed with a much more complicated reality. This reality includes slavery – which, this coming week, will have existed in these lands for 400 years. It includes broken treaties with Native American tribes, Jim Crow and racist land policies and the Chinese Exclusion Act. Who is America, really? Who were we, at our founding, and who are we today? When I look at our nation, I see both beautiful aspiration and terrible oppression, both good and evil, in our past, and in our present.

How long, O Lord? How long until our nation, any nation, every nation, is filled with peace and justice? No one can tell us. But as people of faith, our highest patriotism is to try to bring the power systems we live in at least a little bit closer to God’s ways.  To live like Daniel did: faithful to God in all circumstances, even under pressure of great empires.

Please pray with me. Holy God, it is hard to witness the cruelty and injustice in our world. So many seek to dominate, without concern for their neighbors, equally, infinitely beloved children of God. We, too, are often tempted to seek our own advantage, ignoring who pays the price for our wealth, privilege, and comfort. Inspire in us a fervent commitment to your ways; grant us the courage of those who face down lions, and walk through fire; help us to give our hearts and lives to you, again and again, in humility, hope, and determination. Amen.