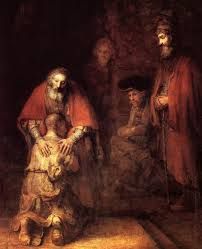 Many of us have heard today’s story before, a story about two brothers who are not getting along. These two brothers make very different choices. The older brother does everything right. He treats his family with respect and love. He works hard on his father’s farm every day. The younger brother does everything wrong. He insults his family by demanding his father’s money. He abandons his family and wastes all their money, living in a selfish and sinful way.

These two brothers make very different choices. That, in itself, might be enough to start a fight. But what really creates a problem is when the younger brother returns home and apologizes. Without hesitation, his Dad embraces him and throws him a big party. This is just too much for the older son to take. He says, “I have never done anything wrong or asked anything from you. You never threw a party like this for me!” In other words: It’s not fair!

His father says: “Son, you are always with me, and all that is mine is yours. But we have to celebrate and rejoice now, because this brother of yours was dead and is alive again; he was lost and is found.”

Why does Jesus tell this story? What does he mean by it?

When Jesus tells this story, he is responding to the leaders of the people. These folks are not at all pleased about who he is spending his time with. Jesus – who is rapidly becoming a celebrity rabbi – doesn’t give them as much attention as they expect. Instead, he spends his time with people of doubtful reputation, treating them like old friends.

The leaders of the people are like the older son in the story. They’ve done everything right. They’ve worked hard, and followed the rules, and now they are respected leaders. And yet, somehow, things aren’t working out the way that they expected. A really special rabbi comes into town and does not seem to notice them at all. Instead, he’s partying with the folks who have done everything wrong.

I have to admit, I have some sympathy for the older brother and the leaders of the people. Most of the time I am working pretty hard trying to do the right thing. Does that mean that I am too boring and responsible to be invited to the best kind of parties, the kind where a messiah might show up? I’m glad Jesus has a soft spot in his heart for folks who are in trouble, but — what about me?

It’s easy to get jealous: of our siblings, or of anyone who is getting what seems like more than they deserve. But although we may sometimes feel we’re doing all the right things and getting nothing out of it, it’s never quite that simple.

The two brothers in the story are different. But neither one is perfect. One is disrespectful, while the other is self-righteous. Both of them create barriers that separate them from each other, and from their father. And all of us are probably at least a little bit like both of them.

Instead of choosing sides between the two brothers, I think we should pay more attention to their father. Notice – he takes the first step in reconciling with both the younger and the older son. Playing the part of God in the story, the loving father is always ready to meet his children where they are and invite them back into loving relationship with him, invite them into the party he is hosting.

Who have you had conflict with lately? A sibling? A spouse? A parent? A child? An employer? A friend? Maybe even God herself?

But consider this: God is throwing a really great party. There are streamers and balloons, amazing food, and an incredible band. God has invited everyone to this party: people we’re jealous of, people who have hurt us, people whom we have hurt, people we feel are below us. God has even invited us. Now, we could turn that invitation down. We could sulk, like the leaders of the people, who feel Jesus hasn’t recognized their true importance. We could stay in a foreign land feeding pigs, like the younger brother almost did, because we’re too afraid to find out if we’ll get a warm welcome. We could stand right outside the door and refuse to go in, like the older brother, because we’re convinced that some of those other people should not have been let in.

We could turn God’s party invitation down. But we’d be missing out on so much. Perhaps, instead, with the help of God’s extravagant and hospitable grace, we may find ourselves hovering around the food table, inching towards the band, and eventually, getting down in the middle of the dance floor with all those other sinners that God loves.