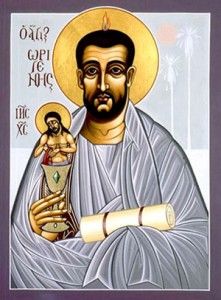 A Reading from Origen’s First Principles.

If you have trouble reading Origen’s First Principles, let me say this: you are not alone. There is a reason that I did not major in Philosphy, or become an academic theologian. Just trying to find a suitable quote to share  was enough to give me a headache. But in surveying the saints of the first three centuries of the church, I just couldn’t leave out Origen, one of the church’s first philosphers and professors.

Origen was born into a Christian family in Alexandria, Egypt. At the age of 17, his father was arrested and killed because of his faith. As legend has it, Origen’s mother had to prevent him from confessing his own faith and being arrested as well. Origen found a different outlet for his convictions: he sold his father’s library for a small pension so that he could become an independent Christian scholar and teacher. As his fame grew, he became a travelling lecturer. Unfortunately, his popularity did not earn him any points with the local bishop, Demetrius. Demetrius was suspicious of Origen and his beliefs, and made significant efforts to monitor and critique him.

Ultimately, Origen freed himself from Demetrius’ criticisms by settling in a more friendly atmosphere in Caesarea, in Palestine, where he established the world’s first Christian university and a substantial library. He attracted wealthy patrons and undertook impressively challenging writing projects. He also became a priest and had weekly preaching duties; we can still read his sermons today. His students include some of the most well-known theologians of the next generation.

Despite, or because, of Origen’s great success, his life ended sadly. During a backlash against local Christians, Origen was sought out and tortured. He was eventually released, but did not survive for long. Just three decades later, theological controversies led to an order for all of his writings to be burned. Fortunately, many of Origen’s writings survived. His importance and influence over our Christian belief and practice has been particularly lifted up by scholars since the mid-twentieth century.  They point out that Origen’s ascetic scholarly lifestyle was emulated by monastic movements. His devotion to close scriptural study invited other believers into a new relationship with sacred writings. His guidelines for approaching the text continue to be reflected today: he claimed that while scripture is a single reality, texts can have many levels of meaning: historical, moral, mystical.

But most of all, Origen is extraordinary in Christian history because of his utter conviction that union with God could be achieved through the mind. Remember that the Christian movement began among peasants who could not read or write. It was hardly an intellectual movement.  Jesus was familiar with the Hebrew Scriptures, but he expressed great frustration with the learned men of his day.

How strange, that just two hundred years later, a Christian would argue that academic study could help us reach out towards God. Faith, he said, was not only compatible with the life of the mind; the life of the mind was a path, if not the path, to faith. It was with this belief that Origen wrote First Principles, a document attempting to reconcile Christian faith with all intellectual schools and questions of the day.

This is what I was trying to capture with the readings from today; the beautiful poem from the beginning of the gospel of John in which Jesus is named as Word, Logos, Wisdom; and Origen’s own writings, where he describes the light and wisdom of God. Origen saw a unity, or at least a meeting point, between divine and human wisdom: this was the way that we could come to know and trust God.

The branch of Christian tradition that we are connected with is greatly indebted to the academic study of theology and scripture. Like Origen, we believe that the mind is an essential tool in the search for God. Sometimes I worry that we rely too much on the mind; that we idolize the mind, at the expense of the heart. And yet personally I would not have been able to become a Christian without first entering its mysteries through the academy; by wrestling with it with my mind.

How much does the life of the mind inform your search for God, your experience with God? And what other parts of ourselves do we need, what other paths might we follow, to discover Her?

God, we thank you for Origen and all the many who have deepened Christian practice through their search for knowledge and wisdom. May we be as eager to know you, and your ways. Amen.