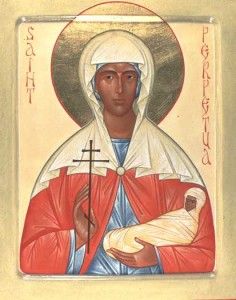 This summer we have been learning the stories of some of the earliest saints of the church. Most recently, I’ve shared the stores of Clement of Rome, one of the first popes, and Ignatius, Bishop of Antioch. But it was not only men who were leaders of the early church; and it was not only Bishops and Popes who left behind writings and stories for us to learn from. Today we heard an excerpt from the diary of Perpetua. Perpetua was a young noblewoman living in Carthage, in modern-day Tunisia. She and her companions were preparing for Christian baptism when they were arrested, imprisoned, and then executed because of their faith.

Perpetua’s account is engaging for many reasons. We can admire Perpetua’s conviction and courage as she faces death. We can sympathize with Perpetua’s father, who throughout the story begs her to save her own life and care for her infant child. We may get caught up in the two strange visions that illustrate Perpetua’s understanding of the life of faith and the nature of martyrdom. We may feel an uneasiness about the enthusiasm with which she and her companions seem to embrace their fate; she writes: “we were condemned to the beasts, and we returned to prison in high spirits.”

Perpetua’s story is only one of many notable stories of martyrdom from the early years of the church, and neither her courage and nor her enthusiasm were not unusual. To understand why Christians were martyred, we have to remember that the early church developed within a vast colonial empire in which religion and politics were intimately related. The Roman Emperor was a God, and those within his empire were expected not only to pay heavy taxes, but also to pay homage to him and other Roman deities. The government did find it expedient to make certain exceptions; Jewish groups, for example, had their own arrangement and were not required to carry out the same sacrifices and vows. But Christianity was an upstart movement without any clear central organization or authority with which to lobby the colonial government. Christians were viewed as trouble makers whose defiance of the state was dangerous. They were outsiders who suffered prejudice, scattered violence, and occasionally, organized, state-sponsored persecution and execution.

Christians like Perpetua didn’t see what happened to them as  purely political, however. She interpreted the persecution she encountered as a sign of the end times, part of the high-stakes battle between good and evil. Martyrdom was therefore not simply a tragedy but also an opportunity: to testify to her beliefs, and ultimately, to be united with Christ in suffering and death.

Although they happened so long ago, the stories of martyrdom that were so important in the earliest era of our tradition continue to influence us in many ways today. The example of Jesus and the early martyrs has helped Christians to see ourselves as independent of any political power, and to embrace non-violent resistance. These beliefs led to some of the high points in our religious history; the reformation, the civil rights movement.

Unfortunately, this same history has also enticed us to see ourselves as perpetual victims. This can be meaningful in times and places where Christians face persecution (as they do today in Iraq, among other places). But we conveniently forget that ever since Constantine came along, Christians have been the leaders in some of the most powerful empires of the world. We may have begun as underdogs, but now we enjoy great privilege. Here, in the United States, we hear plenty of news stories in which Christians seem to confuse the separation of Church and State, or respect for a diversity of beliefs, with a threat to their religious liberty. We are so used to the idea that Christians must suffer for their faith that we have confused freedom of religious practice with cultural dominance, and it is a dangerous mistake.

What shall we do with this mixed heritage, our history of martyrdom? To me, the most interesting question that our history raises is this: What would it look like for us to live out our faith with the same passion as Perpetua? What would it be like for us, by and large, people of great privilege and wealth: what would it be like for us to risk our lives on behalf of Jesus? Might we risk our comfort and profit to protect the earth, our home?  Might we risk our wealth and privilege for the dignity and health of our neighbors?  Might we risk our pride, opening not only our minds, but also our hearts, to the living God, so that we might be transformed, both within and without?

Christians in America today are not considered much of a risk to the status quo. Maybe we could change that.

Powerful Christ, you invite us to give all that we have, to present ourselves as a living sacrifice, holy and acceptable to God. Grant us the courage of the martyrs, that we might at least offer you more of ourselves, seeking always the will of God, and the ways of life. Amen.