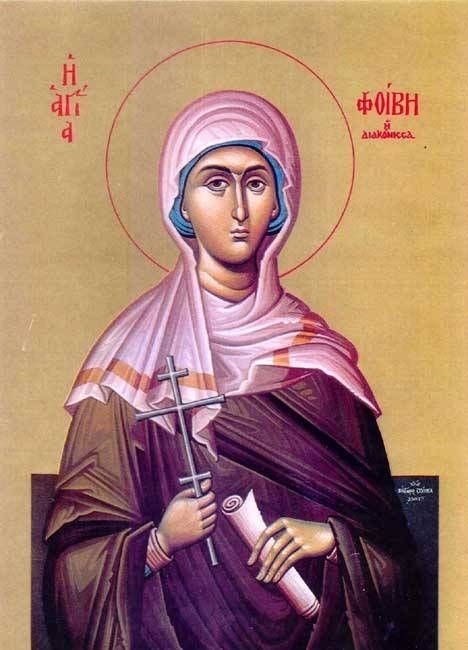 The passage from Romans that we listened to on Sunday is one you may never have heard in a church service before. It’s not listed in the lectionary that we follow; it’s not scheduled for any particular Sunday of the church year. Some would say that was a good decision!  After all,  it’s essentially a list – a set of greetings sent to people in Rome before the end of the letter. So why does it merit our attention?

This summer I plan to share stories of saints from the first few hundred years of the church: people who many of us have not heard of, and yet are the foundation on which we stand today. These are the ones who believed in the good news, and shared it, so that we and so many others might receive it. These are among the first to try to model their life after the life of Christ, to follow in the ways of Jesus, as we are still trying to do. I want to discover what we can learn from them.

And so I have chosen this text for us. It is a list of names, yes, but it is an extraordinary kind of list. Here are the names of people who worked alongside Paul in establishing the earliest Christian communities. They risked their lives and livelihoods on behalf of Paul and on behalf of the good news of Jesus. They professed a faith that created all kinds of problems for them. It caused problems in their personal lives, disrupting families and faith communities. It caused problems in their public lives, making them prisoners, enemies, or at best, irritations of the great empire they lived in.

But I’m guessing that you would not be able to tell me much about Epaenetus, who was the first to convert in Asia for Christ; or Ampliatus, Paul’s beloved in the Lord? We need to remember these saints, even if all we can learn are their names and the praises listed in this letter. We know very little about these folks. But let me point out two things that are extraordinary in this passage.

First we hear about Phoebe, who is a deacon: in other words, a leader of a local church. Paul also describes her as a benefactor of many – a woman of means, probably the host of her local house church. This may seem unremarkable until we remember what a patriarchal society the church was forming in, and how infrequently women’s leadership was celebrated, or even allowed, in the years to follow.

Also of note in this passage is

Junia. Paul writes, “Greet Andronicus and Junia, my relatives who were in prison with me; they are prominent among the apostles, and they were in Christ before I was.” This one sentence has caused all sorts of scandal. The term “apostle” is used for the highest level of leadership and authority in the early Church. Is it possible that a woman was an apostle? Some scholars have argued that Junia was merely “well esteemed among” the apostles rather than “prominent among” them. There is some grammatical ambiguity in the Greek. But even more pointedly, around 1200 ce Junia began to be called Junias, as scholars of that period seemed unable to accept even the possibility of a female apostle.

Paul has a reputation for being sexist, but at least in this passage, perhaps his latest authentic letter, we see him acknowledging and lifting up the gifts of a female deacon and a female apostle, amongst many other women and men who worked together on apparently equal footing.

What does this text have to teach us? I take at least two things. Learning from Paul, I feel challenged to make sure we are being as brave in 2014 in celebrating the gifts and leadership of our members and friends, however well or poorly they are esteemed in our broader community or culture.

And listening again to this list of greetings, I am struck by how human this young community of the church is. Yes, these folks were extraordinary – their lives and their leadership demanded much greater courage and sacrifice than our everyday Christian practice does. And yet, listening to Paul, I hear a familiar affection for all these people he calls co-workers in Christ, chosen in the Lord, my beloved. It reminds me a bit of this church, full of ordinary people, who yet sometimes do extraordinary things, out of love, together. Perhaps we are not so different from these earliest saints.

It is my hope that as we continue to learn about early saints over the course of the summer, we will be inspired: to join their ranks, as co-workers in Christ, and come to understand Christ more deeply.

God, we who gather in this community are just a few of the many who have gathered over thousands of years, and across the world, to worship you in the name of Jesus. Grant that we may inherit some portion of the courage and dedication of those who came before us; and that their lives may inspire us to deeper faith, and truer service. Amen.